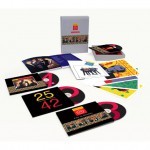 2012 marks the 25th anniversary of Level 42’s Running In The Family Album, and to celebrate, there is a 25th Anniversary Edition Boxset being released on October 8th, including a remastered original album and 12″ mixes, Acoustic re-interpretations by Mark King, the celebrated “Live at Wembley” 1987 DVD, and for the first time on DVD, the “Fait Accompli: Onstage, Offstage, Backstage” documentary which followed the band for a year in 1988. Mike will be joining Mark and the band as they tour the UK, Scandinavia, Italy & Holland starting October 7th, and finishing with a flourish at the Riviera Maya Jazz Festival in Mexico November 23rd.