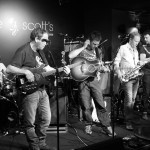 Mike was priviliged to be part of a Superband put together by Mark King for a week at Ronnie Scott’s Jazz Club in London in March, playing Mark King’s solo material, including tunes from Mark’s first solo album Influences, played live for the first time since the recording in 1984, which Mike played and sung on. “It was a very exciting and fulfilling gig to be on for many reasons” said Mike, “great to play non-Level material with Mark, to share the keyboard role with Gary Husband, to be able to stretch out and surprise quite a few punters with Marks tunes, some of which he introduced me to when we first got together in ’79 at Guildhall”. Along with Gary, the band included Nathan, Pete, and Sean augmented by trumpeter Dan Carpenter, trombonist Nicol Thomson and percussionist Miles Bould. Several of the shows were recorded, so there will be a live CD available later in the year for thoses who missed the unique event.